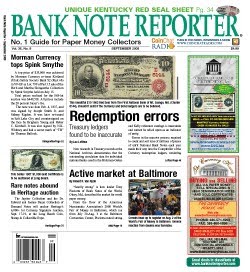 Bank Note Reporter is the premier monthly paper money collecting hobby newspaper published by Krause Publications of Iola, Wis., a wholly owned subsidiary of F+W Media. It was founded in 1973 as an electioneering vehicle by Confederate paper money specialist  Grover Criswell, who was seeking the presidency of the American Numismatic Association in that year.

Criswell’s presidential bid failed, but paper money collectors discovered that they needed a hobby paper that catered to their needs. Criswell sold it in 1975 to Austin Sheheen of South Carolina, who in turn sold it to Krause Publications in late 1978. The first Krause-produced issue was dated February 1979. Ironically, the Krause acquisition occurred during Criswell’s 1977-1979 ANA presidency and Confederate notes continue to be a popular subject for articles.

News coverage focuses heavily on the major auctions that chronicle the evolution of this collectible hobby. Paper money collecting has been enjoying strong growth since the current big-head U.S. paper money designs began appearing in 1995. Prices have been soaring. Many of the hobby rarities have added one to two zeroes to their prices in this period and auctions have gone from rarely reaching $1 million to seeing routine multi-million dollar sales.

Bound into the center of each monthly issue of Bank Note Reporter is a 44-page U.S. price guide, including an introductory commentary to point out what has changed in the past month. This price guide is easily pulled out of the paper and can be carried around for reference at shows.

A more extensive listing of old paper money values for the United States and the world are also available online at NumisMaster.com. Updates are made routinely. Collectors can also access information and listings for world coin dealers.

Bank Note Reporter sponsors an annual show called the Chicago Paper Money Expo. It is one of the three exclusively paper money shows held in the United States.

An award called the Most Inspirational Exhibit Award is given annually by Bank Note Reporter at the International Paper Money Show in Memphis.